The old will be made new,
and the new made holy
- Rav Kook 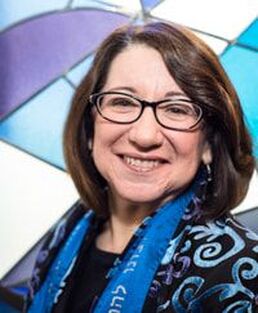 Rabbi Perlin is the first female rabbi to start a congregation, founding Temple B’nai Shalom in Fairfax Station, Virginia in 1986.  She was also one of the first women to become a senior rabbi.  She served TBS for thirty-two years, until retiring in 2018 as the Founding Rabbi Emerita.  She is proud of having created a learned, caring community guided by and living its Jewish values to this day.

Rabbi Perlin has an A.B. degree in Near Eastern Studies from Princeton University, and an M.A.H.L. (Master of Arts in Hebrew Literature) 1980 and ordination from Hebrew Union College-Jewish Institute of Religion in NY, 1982.  She received her Doctor of Divinity degree from HUC in May of 2007.

Rabbi Perlin is known as a master teacher, liturgist, counselor, spiritual advisor, rabbinic mentor, historian, and Reform Movement leader and innovator. She is known for having sent nine rabbis to HUC-JIR.  As another first, Rabbi Perlin was also made Rabbi Emerita of the congregation’s sister Lutheran congregation. She received commendations from every chaplain of the US military upon retirement for her lifetime of serving her career military congregants.  In 2012, she was honored by Jewish Women International as one of its “Women to Watch.”  In 2013, she was included in the Forward’s list of America’s 36 Most Inspiring Rabbis.  This past spring, Rabbi Perlin’s portrait was one of 24 women rabbis featured in the museum exhibit “Holy Sparks,” in honor of the 50th anniversary of women in the rabbinate, and her interview that accompanied the show can be found at https://vimeo.com/661270474.

A committed philanthropist and lifelong Zionist, Rabbi Perlin is president of the Perlin Family Foundation, serves on the Board of Governors of HUC-JIR where she co-chairs the Israel Committee, and continues to mentor rabbis in the US and Israel.

She has been happily married to her husband Gary for 46 years. They are the parents of two wonderful sons and daughters-in-law, and seven adorable grandchildren. In retirement, the Perlins live bi-coastally in Virginia and Los Angeles, and during Covid ran a school for all the grandchildren ages 2-8.

In her spare time, Rabbi Perlin is an avid reader of mysteries, enjoys cooking and entertaining, has a passion for home design and collecting vintage Art Deco, is a student of portraiture and is actively involved at the National Portrait Gallery of the Smithsonian, and has traveled the world to all seven continents.

NOURISH OUR NEIGHBORS: PLEASE BRING NON-PERISHABLE FOOD AND OTHER DONATIONS TO SUPPORT THE PV COMMUNITY FOOD BANK.
​Click here for a comprehensive list of most needed items.

More details on the days

6:15 PM
Kabbalat Shabbat & Installation Ritual
Sermon entitled "The Making of a Rabbi" by Rabbi Amy R. Perlin
Festive Congregational Dinner
​
Join us for an evening of simcha as we install our beloved Senior Rabbi to the pulpit of Temple Chai! She will be installed by her Rabbi and mentor, Rabbi Amy R. Perlin. Dinner will immediately follow the Service and Ritual. Cost for dinner is $25/adult and $18/child. Register below.
10 AM
Learning Session & Bagel Breakfast with Rabbi Perlin

“The Synagogue: Is it still the institution of Jewish survival?”

The landscape of religious life in the US and around the world is changing; some predict the demise of organized religions generally and Judaism in particular.  Taught by Rabbi Amy R. Perlin, this session will explore questions including: Is the synagogue truly at risk of obsolescence and extinction?  What is the landscape of organized Jewish life today across denominations and around the world?  What lies ahead?

“What is old make new…”:  The 21st Century Reform Rabbinate

In this “fireside chat”-style discussion, Rabbi Amy R. Perlin and Rabbi Emily E. Segal will discuss their experiences in the rabbinate, the changes and challenges today around recruiting, training, and supporting rabbis and cantors, and what lies ahead for the future of Jewish leadership in America and Israel.

10 AM
Torah Study with Rabbi Perlin
Rabbi Perlin will be leading our usual Sunday morning torah study. You don't want to miss this unique opportunity.

Our religious school will also be participating in wonderful activities to match the day!

Use the "Register Here" button to add your sponsorship to your registration.
​Thank you in advance for your support!
Register Here